Maya Forstater is a gender critical feminist whose court case against her former employer is bringing some visibility to the utter nuttiness of the trans movement and the broader progressive and leftist community.

A few weeks ago her case against her former employer opened at an employment tribunal, where she was grilled on her “belief” that sex is immutable, i.e. for stating a scientific fact. When this started, I wrote on Facebook that this was some Galileo-level shit. But to be honest, I thought that some level of reason would prevail. Not so. Two days ago, the judge ruled that Maya Forstater’s employer was justified in firing her because her view that sex is immutable “is incompatible with human dignity and fundamental rights of others”.

It is discriminatory to fire people for their beliefs and utterly fascistic to fire them for opinions expressed in their non-professional life. A few weeks ago a woman posted to Reddit because she was called to meet with her boss over private Facebook posts that were considered transphobic. Imagine what we would have said twenty years ago if we thought of losing our jobs over comments we made to our friends at a pub. We would have cited 1984 and most wouldn’t have believed that in the West we were at risk of such scenarios. Social media has taken over the private sphere and it’s absolutely chilling. And with sexist tech bros as our new communication overlords, women are taking the brunt. Women are routinely banned from social media and sent violent and hateful messages, including rape and death threats, for voicing basic feminist analysis.

In the case of Maya Forstater, we’re not just talking about any beliefs or political opinions. What got her sacked was a plain-old, value-neutral statement of fact. In 2019, women who believe that humans are a sexually dimorphic species are like Galileo in front of a tribunal of believers in a magical gender essence that overrides material reality. I’ve said this before: that the trans movement has gotten acquiescence to their dogma inscribed in law and policy is religious fundamentalism.

This case is in the UK, but Americans are no better. The stereotype of American conservatives is that they are anti-science and ignorant with their denial of evolution and climate change. Now, progressives have surpassed the right in their anti-science attitude. Ultimately this finds its roots in a deeper problem with the culture that is not limited to political affiliation. In his article Modern Biology and Ecology: the Roots of America’s Assertive Illiteracy, Jim Britell warns that; “In worldwide surveys of people’s grasp of biological science and evolution, the results for the U.S. jump out as similar to pre-industrial societies. Chomsky says that to find the scale of ignorance about modern biology found in America today, one must go to mosques in Iran or rural Sicily. Ten percent of Americans believe in modern evolution; 75 percent literally believe in the devil! Americans do not generally realize that the furious debates about teaching evolution and creationism are unique to America.”

There is a problem with thinking that only “the other” (in the US this would be the red states) are a problem. After Trump was voted in progressives threw the blame for all potential catastrophes on Trump voters, but Democrats are erasing women as a class and removing our sex-based rights. Articles have been circulating for a while about the rise of right-wing authoritarianism (Trump, Bolsonaro, Putin..) and its dire effects on women’s rights, but in Trudeau’s Canada women are being assaulted by men in prison. In California, Democrat Scott Wiener authored a bill ensuring that men can be housed in women’s prisons, regardless of anatomy.  This not only puts female prisoners at risk, it forces female guards to conduct searches on male prisoners if said prisoner professes he is a woman. I agree with Jo Bartosch, magical thinking should have no place in law.

Denying the reality of biological sex is anti-science, anti-intellectual and untethered to reality. But denying that biological sex is socially, politically and legally relevant is also part of a fundamentally conservative backlash against the gains made by women. It is on par with “I don’t see race”–you can’t fight sexism if you can’t name sex. You can’t provide women their own services, spaces and resources when you can’t define the word woman. People support this because it has been cloaked as social justice and nobody wants to be on the dreaded “wrong side of history”. Sadly, the failure of progressives to think critically is harming those who are already the most marginalized and vulnerable. Women in prisons and homeless shelters are forced to share rooms with men as long as the man proclaims he has some inner feminine essence, children are medicalized and sterilized for gender non-conformity and lesbians are being attacked by the woke crowd for not having sex with males. Not quite the social justice we were sold.

From the New York Times article, Across the Globe, A Serious Backlash Against Women’s Rights: ‘Over the last few years, a global surge in right-wing, authoritarian movements has spurred a broad backpedaling on women’s rights and, in particular, protections against gender-based violence. “In general, we see a very serious backlash against women’s rights,” said Kalliopi Mingeirou, who leads the U.N. division focused on ending violence against women and girls. And that backlash, added Mingeirou, has helped normalize violence and harassment, either by dismantling legal protections or by hollowing out support systems.’ What they fail to mention is that transactivism is part of this backlash and the Left has been eating it up. 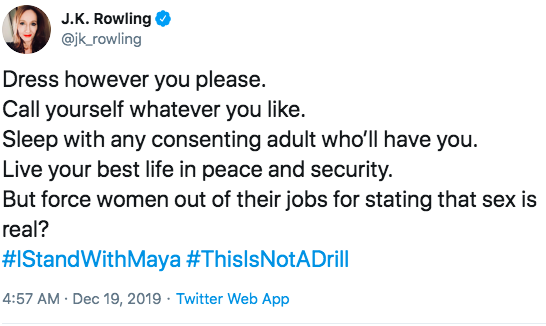 Women who speak the truth are branded as witches again. Is it any wonder that JK Rowling came to our rescue? The meltdown in response to her tweet has been epic. Transactivists are calling her a TERF, a nazi, a bigot, a cunt; complete with calls for her books to be banned and burned. Ricky Gervais has come to the dark TERF side and people are finally starting to ask what the hell is going on. So far, progressives have gone along with the demands of transactivists without trying to understand what those demands were. With the firing of Maya Forstater, the dogma they have been ramming through law and policy with no public discussion is starting to become clearer. 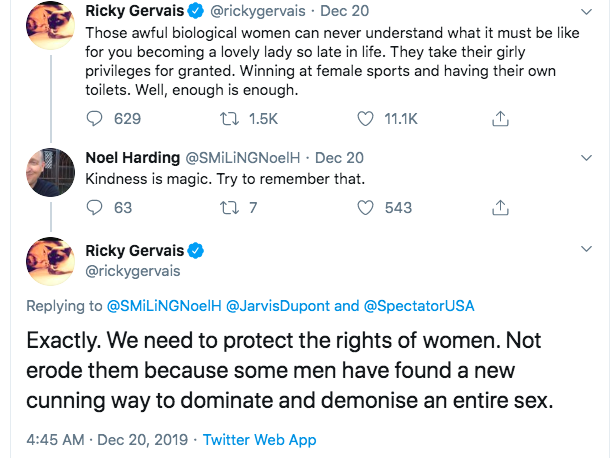 Dr. Jane Clare Jones explains that it is thanks to this lack of public engagement that their gains have been won, “The reason why the trans rights movement cannot allow there to be a public discussion around its political ideology and its implications is because if people really understood that it’s political ideology is committed to denying that there are male and female humans, then the collective ‘What the Actual Living Fuck?’ would be so deafening that the whole political project would be dead in the water. So, instead, it has had to be achieved by a) a ton of behind-the-scenes collusion between trans rights organization and individuals in positions of political and civic power and, b) silencing public interrogation by bullying dissenters, hamstringing the press and public bodies, and making sure that everyone understands the very high social sanctions for speaking out.”

Hopefully, the visibility of JK Rowling and Ricky Gervais are ushering in this collective “WHAT THE ACTUAL LIVING FUCK” moment. It’s about time.