A couple weeks ago, I was privy to bits of conversation of a driver who shouted his rage at a woman who was on speakerphone. He yelled at her to “go to the apartment” and that he would see her there. At the next traffic light I heard him shout “I’m going to fuck you over so bad” and then her cry “why” sounding confused and scared, like she wanted to calm him down and genuinely didn’t understand why he was so angry.

The man was in a truly frightening state and I feared for the woman–I still do. Maybe I should have done something but I didn’t know what to do. Can you call the cops in such a situation? It seemed that the woman lived with this man, but I still hope that she had a way of avoiding him that night and hopefully forever.

Too many women are incapable of leaving or avoiding the men who abuse them and the figures show it. Every day in the US more than three women are killed by a current or former romantic partner. In response to widespread male violence, second-wave feminists pooled their resources and created domestic shelters. These are usually all-female spaces, for women and staffed by women, where women can escape from abusive men and bring their children if need be.

This was an important win for women but, like our other sex-segregated spaces, we are losing them to the cult of gender. A women’s shelter would normally be a safe space from men who might be determined to exert their perceived right to violence against their partners, and from other men who might harass or abuse women. However, with the current move to replace sex with gender ID and gender ID being verified by a simple declaration, these spaces will no longer be safe.

A man who is outraged by some perceived slight from his partner will often go to great lengths to “discipline” or get back at her. With gender self-ID, all he has to do is say that he identifies as a woman, and poof! He is one. As such, he suddenly belongs in women’s spaces and any woman who objects is a horrible bigot who should die in a fire.

It’s not only the men we know that we need to worry about; it is indisputable that women face systematic harassment from strangers as well. We are entitled to protect ourselves from all men, especially when we are at our most vulnerable, for example homeless or in prison. A recent case in Fresno, California, shows how gender self-ID removes this right from women.

Nine homeless women filed a lawsuit against a homeless shelter in Fresno because they were forced to shower with a trans-identified male who sexually harassed them. According to the charity that runs the shelter, federal law requires them to treat anybody who identifies as a woman as a woman. The shelter also requires women to shower in groups. It wasn’t hard to predict that this would lead to problems.

In Canada, two women were kicked out of a homeless shelter after raising concerns over a male resident. According to one of the women, “He wants to become a woman, I mean that is his choice but when a man comes into a women’s shelter who still has a penis and genitals he has more rights than we do.”

In their eagerness to be progressive, policy-makers are hopping on a trend that is anything but, and throwing society’s most vulnerable women under the bus. Women’s concerns have been ignored not only in broader “progressive” circles, but also by the very organizations that are supposed to work for them. This is why in the UK, female survivors of male violence have written an open letter to all women’s organizations asking them to support female-only spaces and to reject current proposed changes to the Gender Recognition Act, which would see the legal replacement of sex with gender self-ID.

Until now, the words man and woman have been defined on the basis of biological reality and the study of male violence against women has used these definitions. Even if you believe that there exists some internal essence or other non-biological trait that should redefine “man” and “woman”, it does not follow that oppression and systemic violence now fall along these new lines.

Like shelters, the creation of women’s bathrooms was also a feminist win, as the absence of separate bathrooms had previously impeded women from participating in the public sphere. Reports from areas that lack separate bathrooms show that our need today for private spaces is as great as always, but gender self-ID allows any man to identify his way into female spaces, effectively doing away with them.

This week, a trans-identified male was charged with several counts of sexual assault against inmates at a women’s prison. The point of sharing these stories is not to vilify men who identify as trans or to paint them as particularly predatory. It is to remind those who have embraced gender ideology that men as a whole are systematically predatory and abusive and that women have a right to exclude any and all men from our spaces so that we might be safe, heal, organize, participate in the public sphere and so on. While individual men can be lovely, they don’t get to opt out of the category of man by stating that they identify otherwise.

Describing the disappearance of lesbian (but not gay) spaces, Susan Cox writes: ‘It appears that even though the project of “queering” is, we’re told, about going beyond gender, the movement disproportionately affects females in negative ways. (…) We can make progressive-sounding pronouncements about certain spaces being inclusive, non-binary, and gender-neutral all we want, but these declarations do not magically disappear the material relations of power between the sexes foundational to our social world.’

People with penises belong to a class that oppresses people with vaginas as a class, regardless of their beliefs, self-perception or wishes that it were otherwise. By putting the demands of males, based on a subjective sense of self, over the rights of females to privacy and protection, we uphold male supremacy. Male violence against women has never stopped being a problem and any truly liberatory politics will condemn the erosion of the boundaries that women have painstakingly erected.

Please support these women who were attacked at the Dyke March by the ever-woke gender ideologues.

Three weeks ago a small group of lesbians was attacked at the San Francisco Dyke March for asserting that they were, well, lesbians. This is where gender ideology has gotten us. Homophobia is cool again and self-professed progressives are too afraid of being chastised for wrongthink to activate their brain cells and think about what they’re condoning. Enough with the ID politics, time for critical analysis.

My analysis (and that of many others) is that gender ideology harms all women and girls and especially lesbians, and San Francisco has been proving me right. After the library exhibit celebrating violence against women, we get lesbians attacked at a march that was supposed to be for them, in a city that used to be known for being gay-friendly.

It’s truly scary to see how quickly a movement can be co-opted and colonized, and this is something that warrants reflection from anyone who is involved in a social movement. I admire the courage of San Francisco and London lesbians who are reclaiming their movement and their marches in the face of hostility, slander, and even “actual” violence. 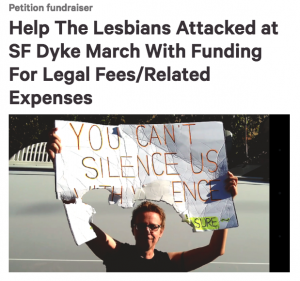 After the women were attacked at the SF Dyke March, the march, the National Center for Lesbian Rights and the Bay Area Reporter posted defamatory statements about them. Please support them by signing their petition for a retraction of these statements and by  supporting their fundraiser for legal expenses.

Read the statement of the women who protested the London Pride:
Get The L Out