Meghan Murphy of Feminist Current has been permanently banned from Twitter for such hateful utterings as “men aren’t women” and for using “he” to refer to a trans-identified male pedophile. Please read her excellent article Twitter’s Trans-Activist Decree.

There is no scientific backing of the existence of an innate gender identity. It is purely a belief – not a fact – about the nature of the human mind or soul. (And even if gender identity were a real thing, why would it follow that we should redefine the words man and woman on the basis of this newly discovered spiritual/psychological attribute?) It’s fine to hold non-scientific beliefs, but believers should not force others to adopt these beliefs or participate in the language or rituals associated with them. To use preferred pronouns is an ideological choice and we should be free to opt in or out of it. I don’t use preferred pronouns because I don’t believe in gender identity, and furthermore I think it is a harmful belief system that reinforces sexism.

(For the uninitiated: preferred pronouns are the pronouns you want others to use when speaking about you, which may be different than those that the English language ascribes based on your sex. For example, you might be female but you see yourself as a complex person, not to be confined by one-dimensional stereotypes about women. Because you are also a sexist, you believe that other women do conform to these stereotypes, and in fact, that’s what being a woman really is! So you ask people to refer to you as “they”, a gender-neutral term that indicates that you are neither an archetypical man nor woman, but a full human.)

To mandate speech that upholds a mystical belief system, and to persecute those who reject or critique that belief system, is religious fundamentalism. While it could be argued that Twitter is a private company and can do what it wants, companies like Twitter and Facebook have effectively taken over the public arena and by censoring feminists, they are excluding feminists from public discourse. And this goes beyond tech companies. In New York  City for example, employers and landlords can be fined for “misgendering” someone. This flies in the face of the separation of church and state.

The heretics of this new religion are mostly female, and the men who vocally reject gender identity ideology are not subjected to the same vilification and abuse. While I rage at the misogyny of this movement, I am more alarmed by the sheer stupidity of gender ideologues and those who support them. This is what Idiocracy warned us about (from Meghan Murphy): 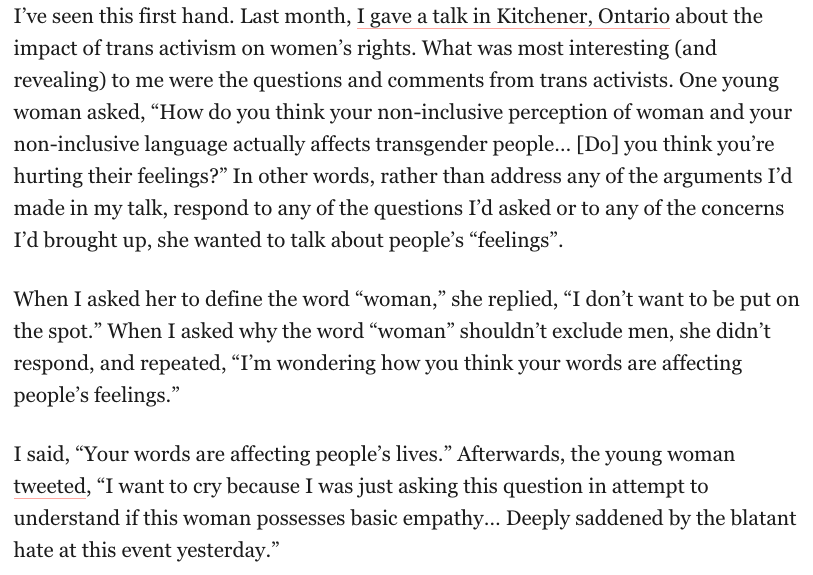 Everything is ID politics, emotional manipulation and histrionics. The capacity for a logical reasoning and rational debate is completely absent. Having only moved to the US in 2010, I can’t say whether this capacity was always lacking in the US or whether this is a recent occurrence. What I can say is that I discovered that in many ways the American “left” now embodies the worst stereotypes of right-wing red state dwellers: populist, anti-science, anti-woman, anti-intellectual…

Liberals guffaw at flat Earthers for prioritizing feelz over facts, but they condone harassing and beating up women who question that a man is really a woman because he claims to have a female soul. And now, while right-wingers aim to take away women’s ability to make decisions about our  female bodies, the self-proclaimed left is leading witch-hunts against women who believe that our oppression is linked to being born in said bodies. A mystical belief system is becoming the basis of law and policy, and women are the casualty–kinda reminds me of my country of origin, Iran. And throughout my lifetime, Westerners have also pointed to Iran as backwards. It’s time for liberals to take a hard look at what they are supporting.